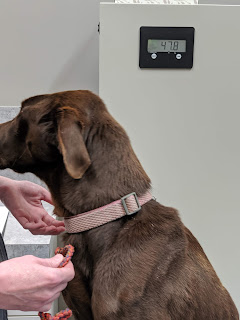 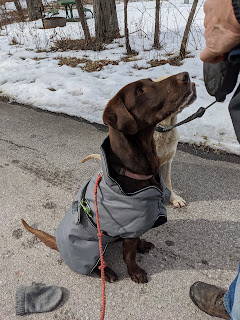 We had a preview of spring here this February weekend with sunny skies and 38 degrees Fahrenheit. Navigating between frozen snow chunks, intermittent ice patches and eagerly emerging mud made for heavenly dog walks.  We got in three hour-long rambles both days. Oh what smells those canines must be inhaling!
It’s been a winter and a half if you include the caucuses as an extra season. I do. A winter of healing. That sounds serene but bringing Jasper back to some semblance of health has not been a serene journey. More like a slow grind with derailments of despair alternating with bursts of optimism- frozen snow chunks, intermittent ice patches and eagerly emerging mud.
Jasper came home from intensive care weighing 38.8 pounds in mid November. Three months later he’s nine pounds heavier. If we can stay apace, he could be a healthy weight this autumn. That’s our goal.
To that end, we will be launching Jasper Love next month. You are invited to join in Jasper’s care and story.
Posted by Centering Porch at 7:38 PM